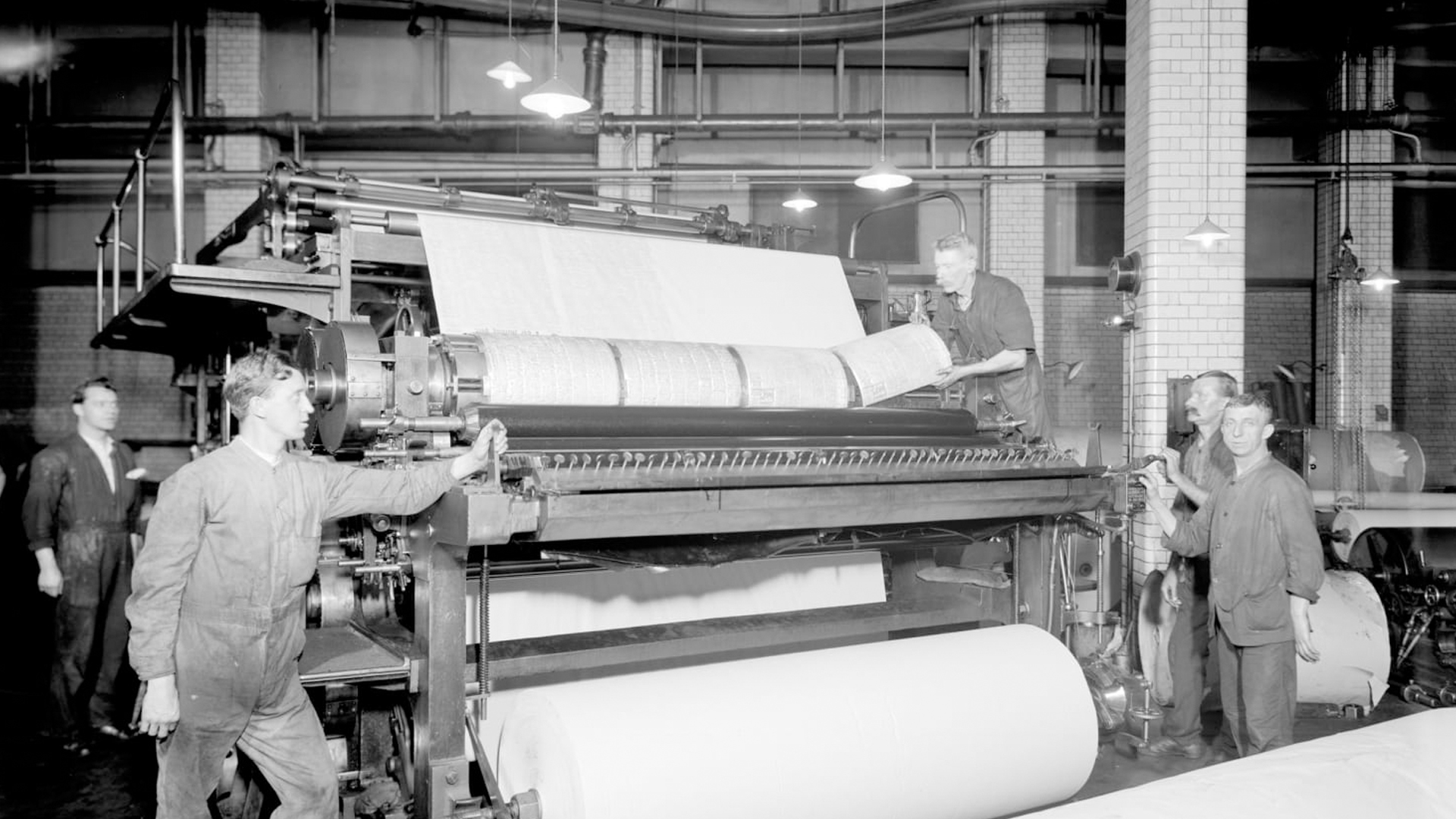 Dittocopies and History of Print

Technology is becoming advanced day by day and people are also adapting themselves according to these changes. Print and its services have been evolved over the past decade and digitalization plays an important role in the print industry. With this evolution, we have created Dittocopies printing company in Jaipur which is an online platform.

Dittocopies is an online print platform where people can easily get photocopies of their documents at their doorstep. You can place your order along with the details either on our website or on the phone call. We provide all the print solutions online at a reasonable price of 50 paise per side of the paper as well as the custom printed pages services. In this article we will discuss the history and the base of printing, we will discuss how the print industry has evolved with time.

When the great founder Johannes Gutenberg has developed the first printing press suddenly after that the new printing practices were also started in the 15th century (1398- 1468). The history of printing, however, stretches much beyond that in time. It's going to take two parts of this blog. The printing history from 3000 B.C. through the revolutionary innovation of Gutenberg is the first section. Part two will be a quick summary of the evolution of the industry till today.

During the Tang dynasty, all printing story has started in China in the sixth century. Several types of technologies were invented in the initial phases following that another invention was made from the vast Empire, which later on used as the new technique of printing. The printing was inked, graven, and pressed on one side of the paper using wooden matrices. In a short period, the printing industry has established its position in the mind of the people, and later it was regarded as the greatest and the best among four major inventions of past Ancient China which can be found in contemporary Chinese historiography.

One of the first books produced with woodblocks was one duplicate file of Diamond Sutra (868), a six-blade long book with a length of five meters. A Korean pagoda has just been unearthed with a previous inscription of AD 750-751.

This stage of printing is popularly known as the most crucial phase in the history of printing: the emergence of a mobile kind. This innovation was again made by China. Bi Sheng created the moving kind of clay at the time of 1041. But it readily had the disadvantage of rupture. The creator, Wang Zhen, began using a more powerful sort of wood in 1298 and devised a process that increased print quality by using intricate spinning tables.

Now to the 15th century with the introduction by Johannes Gutenberg of moveable types in Europe. His approach concentrated on the punch, which was a parallel steel pipe in a comfortable upper head and reverse style: the number, letter, or dot sign. The punch creates a matrix of the type, then places it on a tile, tints it into, and presses the paper.

Then, what were the three main inventions of Gutenberg?

The early Gutenberg Bible was released in a 180-copy print run on 23 February 1455, after an experimental period of roughly a year.

Now let's jump to the year 1843 again. Richard March Hoe just invented the first rotating press, which was developed in the year 1846 and utilized in 1847. So, this upcoming whole scenario is the story of the U.S where from the initial times the whole printing system was being practiced by hands on the single sheets until William Bullock introduced a press fed by the normal paper roll in year1863: the pictures which used to get printed were curled around the spinning cylinders.

Print pressure is quite difficult to handle and flat surfaces are unable to handle it: instead of that, the paper can be put through the cylinder with far more force. Thanks to process mechanization and continuous rolling paper, spinning printing presses have been able to produce up to 8000 sheets per hour. This makes it appropriate for big print runs as a first press. In 1846, the Philadelphia Public Ledger was printed with the rotating press.

In 1875, the popular offset press for metal printing was created by Robert Barclay. The technique for the paper was then modified in 1904 by great Ira Washington Rubel. Moreover, the whole new printing process relies on the normal chemical process which is about the oil-water repulsion.

However, it's all but simple to print. A plate is split into two parts: the lipophile image area that consequently draws tin and the hydrophilic non-image portion that resists the ink. A plate is soaked in along with that it is linked with a solution binding to the non- image region. The ink only fits the picture, after that is gets first shifted to a cylindrical- shaped rubber object and lastly is gets printed on the sheet of paper.

How are the offset printing benefits?

The disadvantages part of this stage:

These offset presses are usually hard to handle and the procedure of this press is difficult also. This printing technique is, therefore, economic for big print works only.

In the year 1885, a lino-type, a type fixing machine was created by German founder Ottmar Mergenthaler. The effectiveness of this technique was that it constructed type lines automatically. The operator created the text lines using keys on the keyboard in much the same manner as a typewriter. Every key of the keyboard would release the matrix following that the matrix would be aligned with the other character. The matrix line was then filled with cast, molten lead, inked, and pressed onto sheets of plain paper with the objects.

While the linotype seems to be an intricate procedure, it accelerates printing considerably. It syndicates that the typesetters had to build print lines, one character at a time: all was mechanized.

The first print of the lino-type machine in 1886 was the "New York Tribune," the newspaper that was founded in New York in 1841. First, in 1897 in Italy, it was employed to print one of the main dailies in Rome, "Tribuna."

Thomas Edison named the "eighth marvel of the world" linotype machine which highlights the importance of this machine in print history.

In 1971 laser technology was invented by Xerox Corporation. The content which is going to be printed with a Laser Printer is produced electronically and printed directly onto the paper sheet. More specifically the laser passes the picture into the photosensitive selenium cylinder (known as "drum") and is immediately put on the paper using toner. With this technology, approximately 20,000 lines per minute may be printed. Break record. More significantly, though, from here on, everyone would be able to print at their business or home, anytime they chose.

The laser printers which were launched seem to be space consuming and bulky so sometimes it became difficult to handle them. Moreover, they were sophisticated and highly costly, and completely strange from the printers which are used by the people currently in the digital world. And we had to wait until 1982 for Canon to deliver the initial desktop-based laser printer. Its enormous cost, however, was unlikely to afford.

In the time of 1990s, this practice was started when laser printers and dot matrices, inkjet, and color sublimation printers became readily available for the public. From that time, printers are getting cheaper, more compact, and more effective.

Today we have reached. In the 3D printing age, we conclude our trip through time. This printing method was discovered fact a few years back when Chuck Hull started using UV rays for hardening varnishes in 1983. The technician named his discovery "stereolithography," a process that makes it possible to produce solid things with the addition of overlapping layers of a liquid photosensitive polymer that has been affected by UV radiation. But from where does it begin? 3D model manufactured with software modelings such as Blender, AutoCAD, or OpenSCAD.

There are today unique 3D printing technologies. They differ mostly in the manner they construct several layers. Moreover, they may utilize heat-melting materials, liquid materials which are laminated or hardened, and connected materials.

The 3D color printing took years to be utilized broadly and you must be thinking why? Because the early costs of 3D technology were enormous. But in many sectors like architecture and archaeology, art to health maintenance the 3D printing being utilized with more constantly being added.

What's the next stage in printing history? We cannot wait to find out and continue with you on this adventure.

Technology is a boom in various sectors and print technology has evolved in many stages. The print machines which we are using currently have passed through the experiments and innovations. You must feel lucky if you are using advanced and online versions of printing solutions. From ancient times to this new era the printing has become advanced and easier for different purposes. This article has concluded that printing is a necessity for people for the past few decades. So, we are the ones who print on demand of people online. If you want the printed photocopies and xerox online then the Dittocopies printing company in Jaipur is the best option.